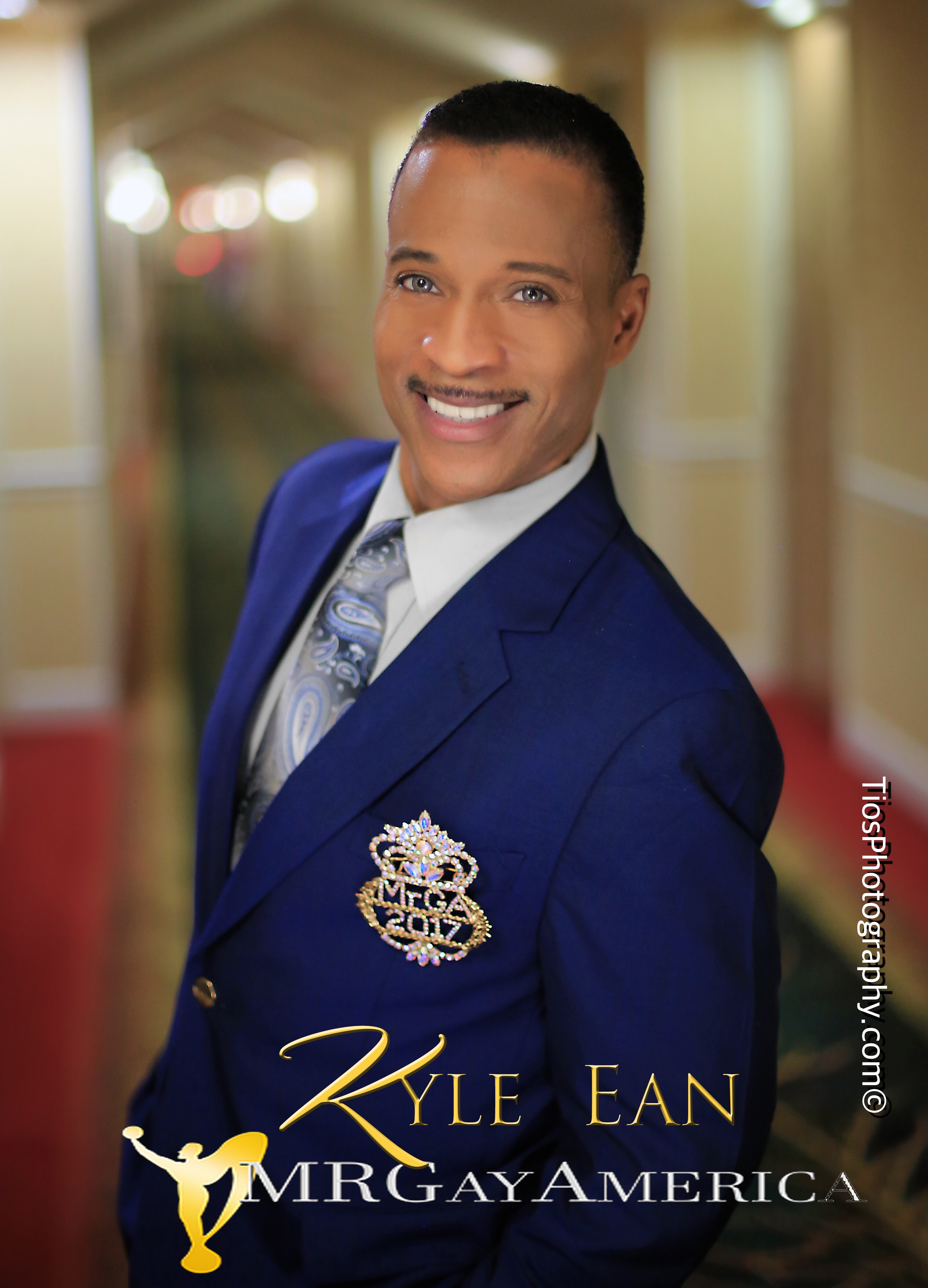 In 1995 I arrived in Dallas, Texas feeling that I was ready to be Mr. Gay America. I have worked hard on my body... practiced my talent everyday.. and remained up to date on all current events. After 3 days of preliminary competition, for the first time in my competition career, I am heading into final night without winning a preliminary group award. On my way to the competition location, I was thinking, "Oh my, did I even make the top ten?", as during preliminary night talent I had two bad slips and one complete fall. There we were, 52 men, all of us winning or qualifying through our state/regional contests.  I was Mr. Gay Gulf Coast America, which was to be the top regional in the system.  They started announcing the top ten finalists, and I did not hear my name. Then, there were nine contestants standing in front, and as I looked to my left, I saw the very handsome and talented Steven Kaylen Riser, the first runner up from last year. I knew for sure, I did not make it.  I then heard "And your tenth and final contestant is Kyle Ean, Mr. Gay Gulf Coast America."  I cried as though I had won the contest.  I was thinking to myself "I have to pull it together and refocus on competing. God has given me a second chance."  After competing in the swimsuit category,  my heart was in my throat with the memories of the disastrous preliminary talent I had 3 days earlier. I stepped on the floor, and all I could think about was “this floor is ice.”  My heart started pounding, and I said a prayer, "Dear God, no slips, falls and I need to always landing on my feet."  The music "Fabulous Feet" started, I did my first turn/leap combination, and landed on my feet, slid three feet, and the audience applauded.  I knew at that moment it would be the performance of my life, and it was. I looked great in formalwear and I nailed on stage question.  Next was the time to call the winners:  4th runner up, Joey, 3rd runner up Antonio, 2nd runner up, Christopher, and then it was myself, final night talent and Q&A winner, holding hands with John Reny, final night swimsuit and formalwear winner.  John and I had held hands a few months earlier at Mr. Gay Gulf Coast America, in which he was my first alternate. Even though I felt that my performance that evening was good enough to win, I knew in my heart John was more of what the system represented and wanted.  I was right, as John Reny was named Mr. Gay America 1995.

So now 22 years later I get a phone call, "Kyle, the new owners of Miss Gay America are considering bringing the male pageant back". I held the phone speechless with no words to say. All I could say was, "I will do it".  Weeks later, when the 2017 contestants video came out, I experienced something that I never felt before, "I am not good enough".  I am 22 years older, 15 pounds heavier, and do not dance much anymore. Even though I would likely walk in with the strongest résumé,  it would mean nothing if I couldn’t compete at the highest level.  For nine weeks, my life consisted of the gym, diet, cardio, re-breaking in tap shoes, interview notes, and current events all day everyday.  I returned to Dallas, with no hype, unnoticed, hoping to have a good week. I had no social media following, no shout-outs, and was just putting my head down to knock out each category one at a time.  In my heart, I knew I was competing at my highest level.  I knew in my heart that I was bringing my best; however, there were 9 of the best male competitors in the country with me, and 4 of them were former and/or multi-national titleholders.  As luck would have it, all of us made it into the Top 5.  next up was Q&A, which has always been my strongest category. As I was standing on stage with some of the top competitors in the country, I get my question, "What is the single biggest problem facing the gay community".  This was a gift from God; however I knew I had to stay focused and just answer the question!  I knew it was not going to be good enough to simply just answer it.  I knew I had to knock it out of the park.  It was safe to say that I had. So while standing on stage, I began getting A knot in my stomach; the same know I felt 22 years prior.  I knew I presented my best, but so did these other amazing young men.  And then it happened…4th runner up, Michael LaMasters, 3rd runner up, Mykul Valentine, 2nd runner up, Jeffrey Kelly... and now I am holding hands with Judas Elliot (winner of talent & presentation) and myself (winner of interview & Q&A). When they called out Judas as the first runner up, 22 years of tears watered my eyes.  A dream that I thought was forever gone was now my reality and I would have the honor of representing our community and this wonderful system throughout the United States.  Each and every day that week after my win, I cried tears of happiness with disbelief that I am your new Mr. Gay America.  As I sit here typing this, I have already been hard at work introducing myself across the country.  In 3 short weeks, I have been back to Dallas, and have trips planned to Houston, Vegas, Columbus, Orlando, Oklahoma City and Louisville. Special thanks to the promoters OF Miss Gay Texas America, Miss Gay Ohio America, and Miss Gay Oklahoma America for treating me like a King. One thing that is making my reign so special is having the opportunity to work with Miss Gay America, Suzy Wong. She has been an amazing example acclimating me to my title. Many are asking me what my goals are for this year.  The answer is simple:

1. Grow the system into the largest and most prestigious in the country.

3. Mr. Gay America having a political voice in today's climate.

4. Having fun while reigning.

Finally, thank you to Mad Angel Entertainment for this amazing opportunity, and I promise to work everyday representing the excellence that you have bestowed upon me. 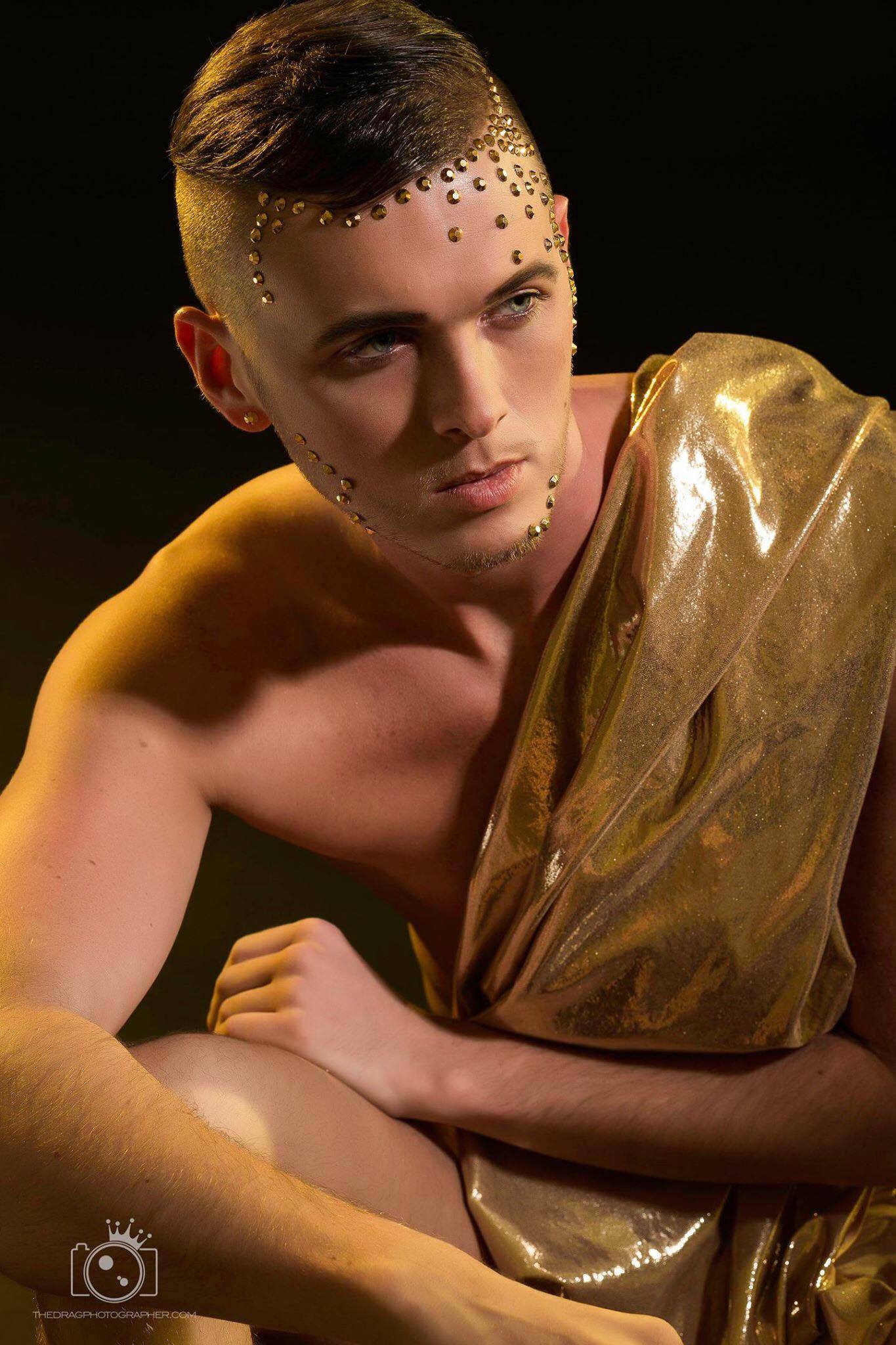 1. If I was to come to your house for dinner... what would you cook for me and why?

If you came to my house you would almost definitely have seafood or chicken! Those are both my go to meals! Chicken is universal so it goes with everything and being from Maryland I eat and love seafood like it going out of style!! And I have an act for sweets so there would also be cake or cookies of some sort!

First were going to eat because in order for me to turn up I need carbs of some kind! Ha Afterwards wed head to the popular strip of the area and hop place to place... all while staying incognito because after all were performers and professionals! We can't be seen causing to much of a fuss! Haha

3. What advise would you give me to make sure I have an amazing reign?

My advise is to embrace yourself and do everything exactly the way you want it! After all it is YOUR reign! This is your way of showing who you are as a performer, Administrator and representative of the America system!

4. What were you thinking holding hands with me at the end???

My first thought was, "omg we made top two!" With the issues I had that day I was worried of making the 5, but making it to the final two spots was a highlight and accomplishment all on its own! I also thought to myself how fulfilling it was for you returning after so long and being so close to what's been a lifelong dream of yours!